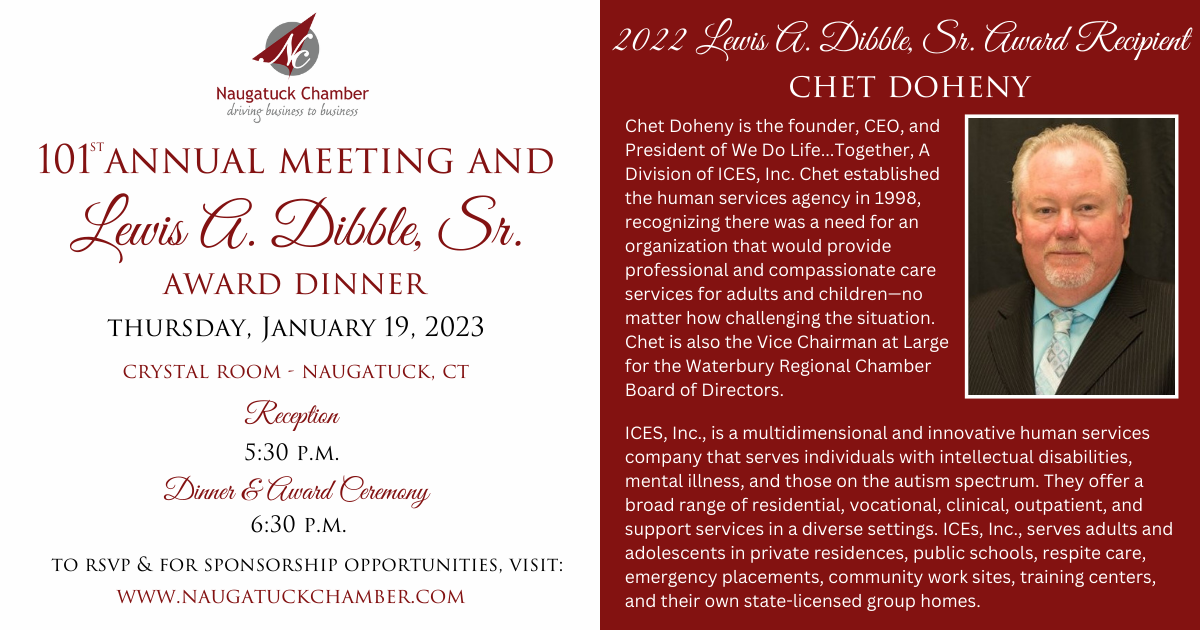 The Naugatuck Chamber of Commerce will present its 2022 Lewis A. Dibble Sr. Award in January to Chet Doheny of We Do Life…Together—A Division of ICES, Inc.

The award, presented annually by the Chamber, recognizes an individual’s outstanding contributions to the business and the socioeconomic well-being of Naugatuck. Doheny will receive the award during the Naugatuck Chamber’s 101st Annual Meeting and Lewis A. Dibble Award Dinner on Thursday, Jan. 19 at the Crystal Room in Naugatuck. The meeting will begin with cocktails at 5:30 p.m., followed by dinner and the awards program at 6:30 p.m.
​
Doheny established the human services agency We Do Life…Together—A Division of ICES, Inc., in 1998, recognizing there was a need for an organization that would provide professional and compassionate care services for adults and children—no matter how challenging the situation. Doheny is also a Vice Chairman at Large for the Waterbury Regional Chamber Board of Directors.

“Chet heads a company that has tremendous impact not only right here in the Borough, but also throughout the state of Connecticut,” said Kevin McSherry of the McSherry Law Firm, and the Chairman of the Naugatuck Chamber Board of Directors. “He believes that ‘teamwork makes the dream work’ for the adults, children, and families that benefit through his assistance and help in improving their lives. He is a leader in giving generously of his time and resources. We are grateful to Chet and his organization for all the lives that have been enhanced, improved, and supported for 25  years.”

The prestigious award is named after Lewis Acker Dibble Sr., who lived in Naugatuck his entire life, played an influential role in founding the Chamber during the 1920s, and served as its first president. Born in 1895, Dibble was educated at Yale University and later served in leadership positions at a variety of area manufacturers, including the former Naugatuck-based Risdon Manufacturing, which was a leader in producing eyelet machine tools, cigarette lighters, and most notably, lipstick cases. He retired from the Eastern Malleable Iron Co., now The Eastern Company, in 1968.

In addition to honoring Doheny, the Chamber will look back on the successes it had in 2022, acknowledge members of its board of directors, and will provide a preview of what’s to come in 2023, including Duck Day, which will take place Sunday, June 4 in downtown Naugatuck.
​
Since 1976, the Chamber has honored Dibble’s leadership by recognizing a key leader in the local community. Past recipients have included Attorney Carlos A. Santos of Fitzpatrick | Santos | Sousa | Perugini P.C.; Marcelo R. Martins of Luso Cleaning Services LLC; Kathleen A. McPadden of Ion Bank; Naugatuck Mayor N. Warren “Pete” Hess; Naugatuck Economic Development Corp. CEO Ronald Pugliese; Laurie Yelding of Yelding Inc., and Rebecca Zandvliet of Coldwell Banker Realty 2000.
register now
For more than three decades, the Naugatuck Chamber’s Annual Meeting and Lewis A. Dibble Awards Evening has grown to become one of the most prestigious business events in the Naugatuck community. The highlight of the evening is the presentation of the Lewis A. Dibble Award, presented to a local leader in recognition of their outstanding contribution to the business and socio-economic well-being of Naugatuck.
​
Lewis A. Dibble, founder and first president of the Naugatuck Chamber of Commerce, became president of Risdon Tool and Machine Company and president of the Eastern Company. As a member of the business community, he advocated for economic growth of Naugatuck and demonstrated great leadership to others.

Over the past 37 years, the Naugatuck Chamber's Annual Meeting and Lewis A. Dibble Award Dinner has grown to become one of the most prestigious business events in the Naugatuck community. We invite you to show your support for this special evening by becoming an event sponsor. Explore the opportunities for exposure for your business, which includes your company on the event invitation, marketing exposure, and more, by clicking below. Secure your sponsorship by December 2, 2022.
Sponsorship Opportunities